Our cyclists make it to Paris! 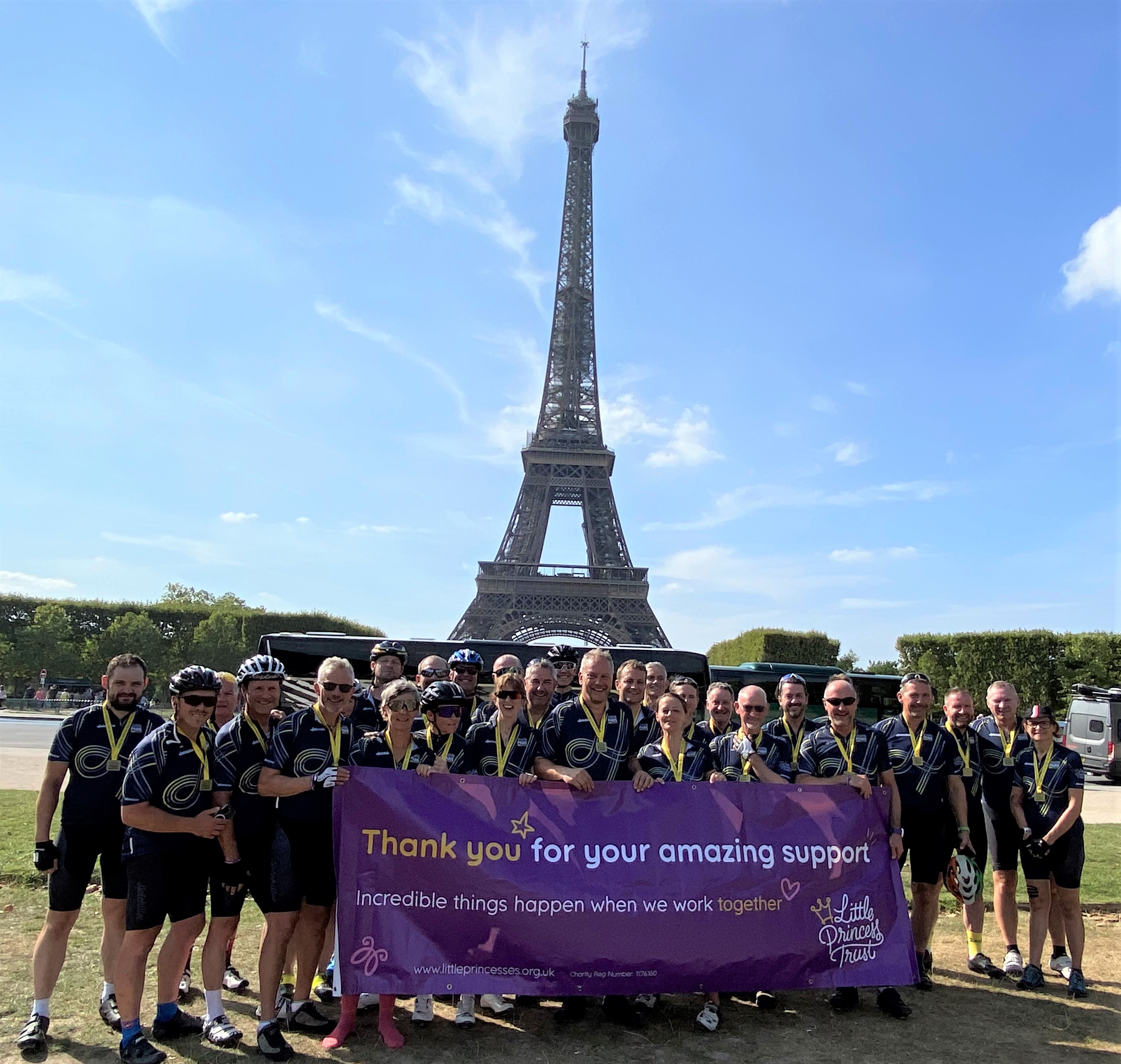 The Little Princess Trust’s inspirational team of cyclists can finally put their feet up after pedalling all the way to Paris.

Riders overcame hills, hundreds of miles and hurdles at borders to make their way into the French capital on the weekend.

And many of our team of 40 had also put up with cancellations caused by the Covid-19 pandemic.

It was more than three years ago that The Little Princess Trust first began talking with event organisers HotChillee about entering a team of cyclists in the London to Paris ride.

We were due to enter the event in both 2020 and 2021 before both rides were cancelled due to the pandemic. 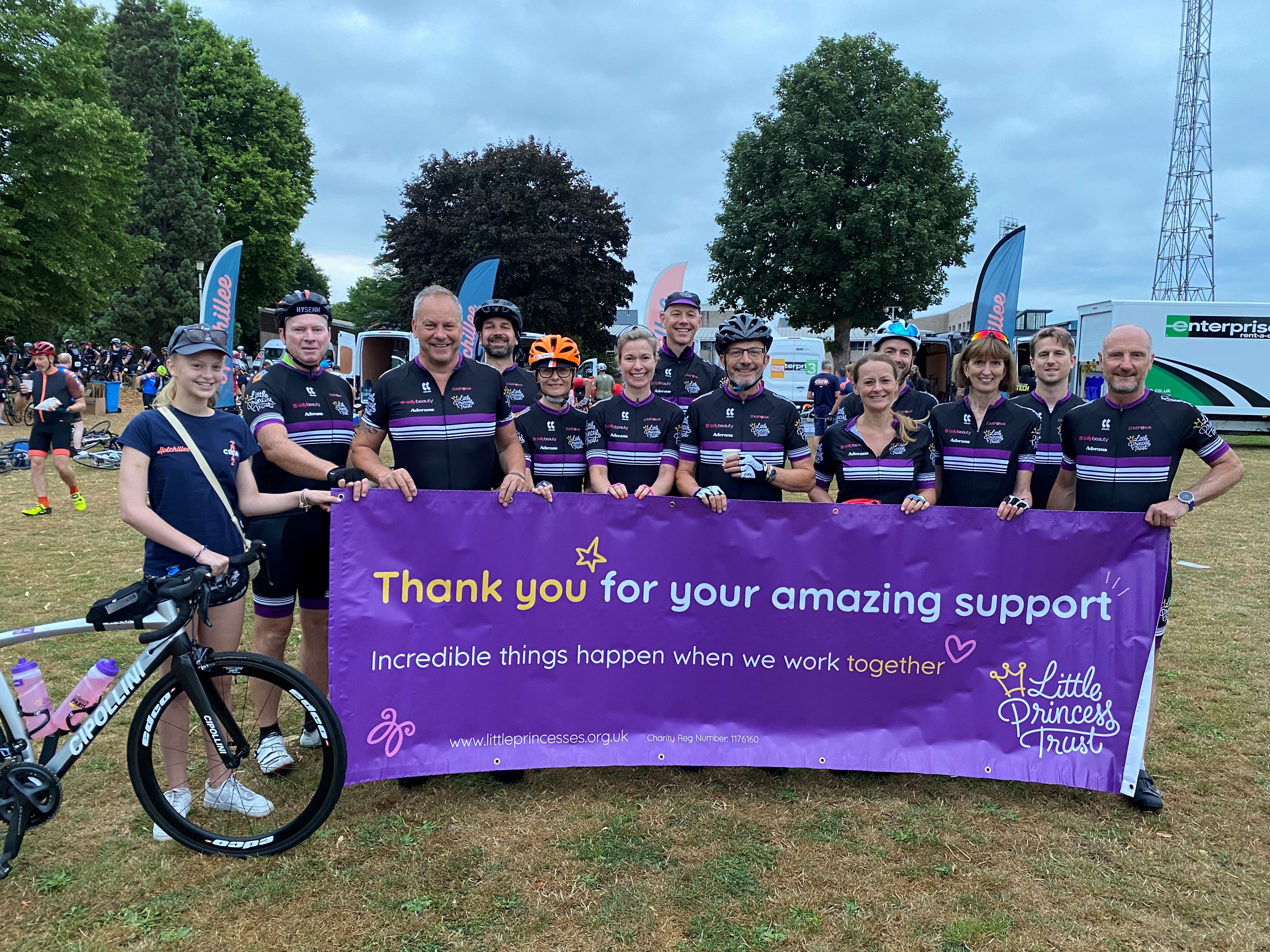 But undeterred, our riders – a mix of serious and social cyclists – continued getting out on the road and trained for the three-day event.

So there was then an understandable amount of relief when the cyclists finally set off from Imber Court in south west London last Thursday morning.

Our tremendous riders went on to cover almost 320 miles in total and their combined fundraising has now surpassed an incredible £60,000 for LPT.

That money will help us continue to fund childhood cancer research and provide wigs to children and young people. 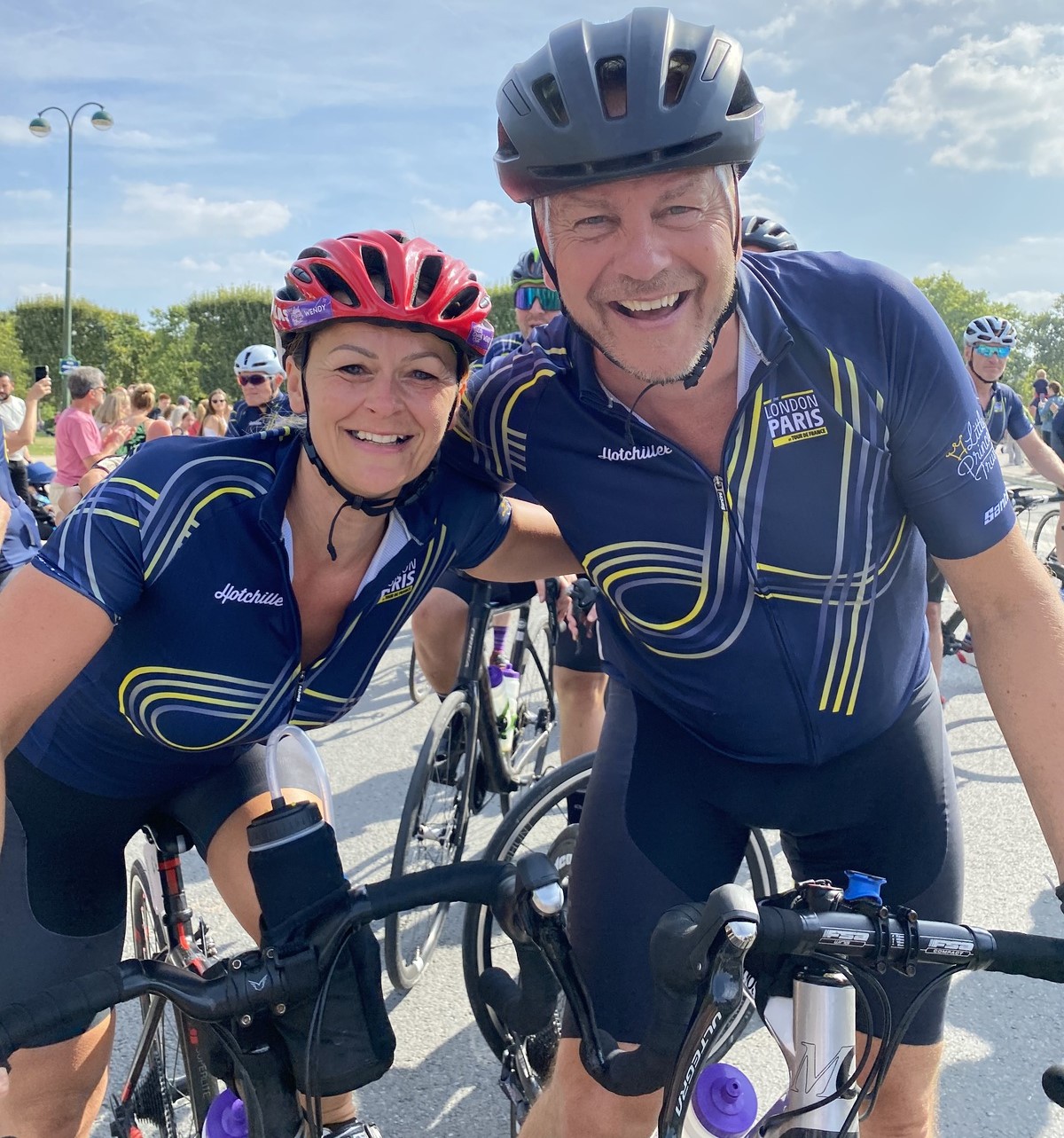 Phil Brace, Chief Executive of The Little Princess Trust, was one of the riders wearing the LPT purple kit.

He said there was an incredible team spirit and was sure that every single person who took part would take away their own special memory to treasure forever.

Phil thanked every single person who had supported the riders and “pushed them all out of their comfort zones to do good”. 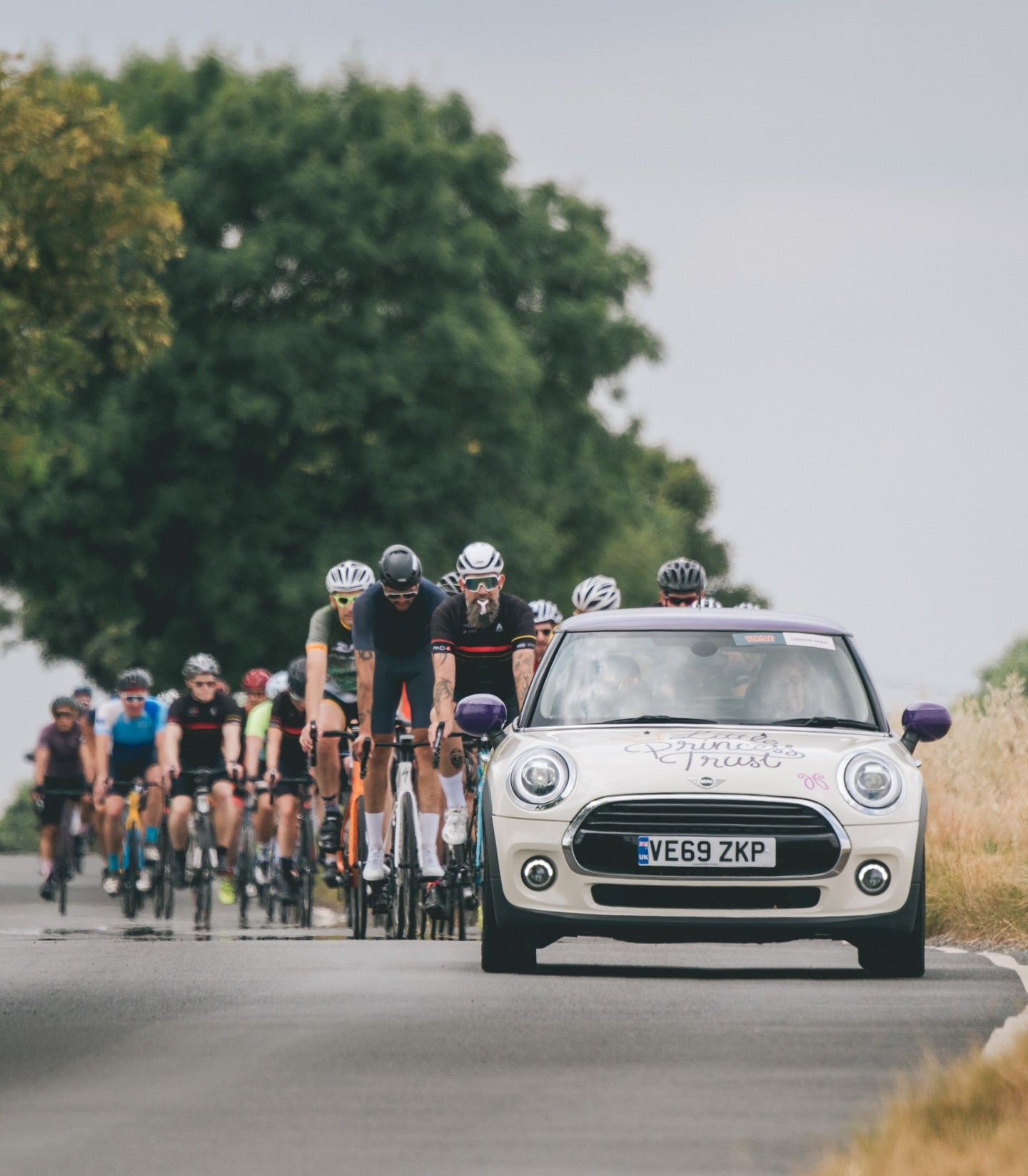 He also paid special thanks to:

The aches and pains are starting to fade, but the memories will last a lifetime.

Phil also wanted to thank LPT rider Pam Kearns - who is also Professor of Clinical Paediatric Oncology at the University of Birmingham.

Shortly after crossing the finish line near the Eiffel Tower, she told hundreds of cyclists the importance of how her work - funded by The Little Princess Trust - is searching for kinder and more effective treatments for childhood cancers. 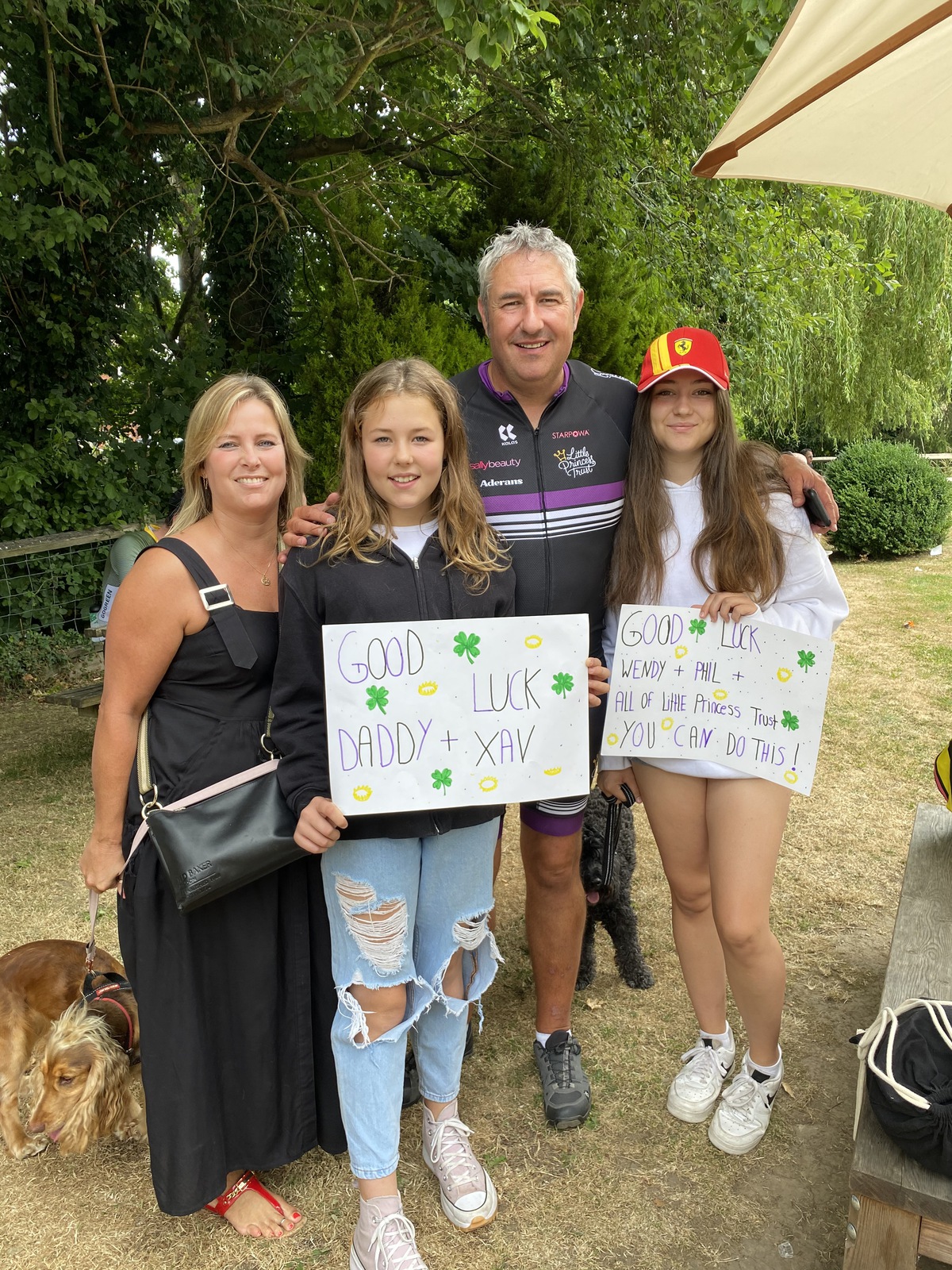 Piers Collins was another cyclist who, like Pam, had a strong connection to LPT. His daughter Teiva received a wig from us. She has now finished her treatment and is an LPT Ambassador and was on the course to cheer her dad and her uncle Xav Anderson on their way.

Little Princess Trust Founder Wendy Tarplee-Morris was also among the LPT cyclists on the mammoth journey.

She said: “Cycling over 100 miles a day was pretty gruelling at times, but it was the experience of a lifetime to do it with a group of such amazing people - all supporting LPT.

“The aches and pains are starting to fade, but the memories will last a lifetime.”

5 Ways Your Business Can Support LPT